We stay on the Darjeeling railway — sort of — for today’s Global Hit. That’s a song from the soundtrack to the movie “The Darjeeling Limited.” The tune is the classic French pop song “Les Champs-Elysees” by Joe Dassin.

In the off-beat musical mind of filmmaker Wes Anderson, Les Champs-Elysees works just fine as an association with Darjeeling. The soundtrack also features songs by the Kinks and the Rolling Stones. But Anderson mostly keeps things regional.

He offers up the deep strings of the sarod, played by Indian classical composer Ali Akbar Khan. Ali Akbar Khan composed this work for another film. The song first appeared in a Bollywood movie called “The Householder.”

That came out in the mid-sixties. In fact the bulk of the tunes from “The Darjeeling Limited” come from other movies — mostly Bollywood flicks.

Wes Anderson was drawn in particular to the music of filmmaker Satyajit Ray. He’s well-known in both Bollywood AND Hollywood.

And Ray serves as the ideal bridge for American audiences dropped into Anderson’s odd tale of three brothers on a train voyage across India.

As in Wes Anderson’s past films, The Darjeeling Limited isn’t just about the story.

The movie serves as a quirky delivery system for delightful and unfamiliar music.

Last night on The Daily Show, the news bit on torture featured an image parodying The Life Aquatic: 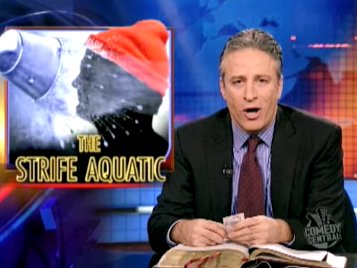 There will be more late night tv coverage as Bill Murray appears on
Letterman this evening.

A great interview with Wes and Jason on
Cleveland public radio

“Well, I think there are enough filmmakers like Spike Lee and Wes Anderson who will know what kind of parts to write for me. I can wear the turban and have the beard in film after film and yet play different characters. The role Wes offered me in Life Aquatic didn’t call for an Indian-looking guy. It wasn’t a typecast role. I hope that 20 years from now, there are going to be more Sikhs in the movies.”

“We just wanted a studio on wheels.”

A strong, very academic defense of Wes on the racism charge:

“The notion that art has to do, be, or reflect any one thing should be rightly understood as the least sophisticated mode of criticism.

But he (Noah Weiner) reveals something when he, seemingly out of nowhere, praises Anderson-pal Noah Baumbach’s The Squid and the Whale, a film which, though I liked, I remember to be equally “privileged, bookish, prudish, woebegone, tennis-playing, Kinks-scored.” The difference with that film is that the characters were all white. Seemingly coded in this sort of racially-based critique is the paradox that, rather than a lack of plurality in the racial makeup of characters, it is actually the simultaneous coexistence of subject and other in the same frame that is unsettling.”

Popmatters says
“The Darjeeling Limited is an Anderson epiphany . . . idiosyncratic filmmaking at its finest.”

TDL closed the London Film Festival – apparently Ray Davies of The Kinks was in attendance.