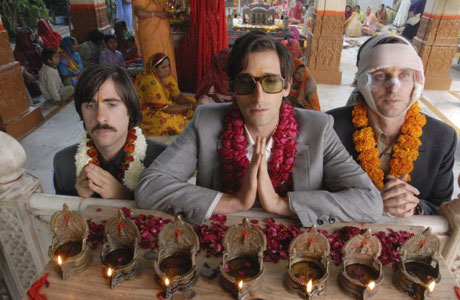 We all know what quirkiness is, but as a film sensibility it’s become something like what ‘screwball’ was to comedy in the 40s.

A cobra in a box, a tiger on the loose, Raj-era Tintin-like stereotypes and Owen Wilson. All these things together in one movie set in India can only mean one thing: Wes Anderson has a new film out. The Darjeeling Limited is business as usual for Anderson: family dysfunction and pristine set design; every scene traced in with whimsical misadventures and poker-faced witticisms (“I love you, but I’m gonna Mace you in the face”), all perfumed with an impeccable eau d’irony.

Atlantic Monthly contributor Michael Hirschorn recently dubbed Anderson’s modus operandi “quirk”, “the ruling sensibility of today’s Generation X indie culture”. It’s not hard to come by these days. In the cinema, Hirschorn cites Napoleon Dynamite, Garden State, Little Miss Sunshine, Everything is Illuminated, Me and You and Everybody We Know, as well as Anderson’s oeuvre. You could certainly add Wristcutters: A Love Story, also out this whttp://www.theatlantic.com/doc/200709/quirkeek, set in an purgatorial afterlife for suicides filled with meandering slackers going on road trips and trading Coupland-esque loops of bombed-out conversation.

We all know what quirkiness is, but as a film sensibility it’s become something like what “screwball” was to comedy in the 40s: a set of rules (and hence moral assumptions) that govern over a fictional world. Atmosphere, surreal observations, pop-culture-filtered flotsam and random encounters take priority. And plot? Generally speaking, the quirk films display a similar attitude to plot as the Gen X gang did to 9-5 employment: something previous generations chased after.

Perhaps the quirky sensibility has its roots in observational, auteur-led cinema of the 70s Raging Bulls brigade, then the 80s American indie scene where the survivors took refuge when Spielberg and Lucas cleaned up. The oddball, antic approach has meandered from strength to strength since. Generation X are probably busy writing their wills, even Generation Y are getting older, and quirk is a firmly established style. The studios might give Jim Jarmusch a job now – even if he’d tell them to stick it. Anderson’s growing profile (in proportion to weakening output) shows that the mainstream gets him, and you can add a raft of other film-makers of similar age doing similar things. Donnie Darko’s Richard Kelly stands out for crimes against conventionality, as well the great MTV triumvirate: Spike Jonze, Mike Mills (remember Keanu Reeves’ New Age-fixated dentist Perry in Thumbsucker?) and, of course, Michel Gondry.

Hirschorn is pretty hard on quirkiness, deeming it “a self-satisfied pose that stands for nothing and doesn’t require you to take creative responsibility”. Maybe because I fall smack-bang in the middle of the demographic that created it and I have a tendency to regard my life as a string of encounters that some unspecified observer (my peers, if I’m feeling particularly desperate) may or may not be taking a dim pleasure in, I find it harder to condemn.

“Post-ironic” as it’s been dubbed, quirkiness definitely has cul-de-sac potential. Anderson is in danger of becoming a cautionary tale. He’s become a repeat (albeit usually enjoyable) performance. Rogue authority figures and families getting by constantly crop up in his films, to be softly wrapped up by the director, but it feels like he’s skirting the conflict that would mean serious drama and emotional sacrifice. It’s no surprise he had to put his new film on rails to generate some forward momentum.

But I think quirkiness has its redeeming value. Post-ironic does sound meaningless, but it’s a make-do tag for a world in which everything has been said, described and subject to representation. Even acknowledging this – irony – has become a devalued tool (one paper reckoned this week the Sex Pistols’ latest reunion had, for want of a better term, gone “beyond irony”).

The quirky sensibility, then, is maybe a gentle strategy to say something new, see things fresh, from an askew angle. There’s a sly lyrical pleasure at work in Wristcutters, for sure. In some respects Gondry shows as many signs as Anderson of being stuck – the lovelorn man-child is a perennial in his films – but his work is so intensely besotted with its own creativity, it seems to take you through a solipsistic wormhole into another universe (see the amazing recreations of Hollywood’s output in his new film Be Kind, Rewind – awesome title, too!).

Then there’s David Lynch. You could call his work quirky, but that would be like calling world war meanspirited. But he’s the leading example of the places you can get to if you let a spirit of waywardness flower

One Reply to ““In defence of quirkiness” (Guardian, U.K.)”