‘One does feel misunderstood’

For Wes Anderson, real life and films get very mixed up. He talks to Xan Brooks about his Indian odyssey, confusing critics, and the problem with Owen Wilson. 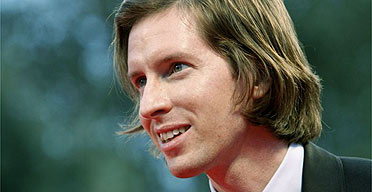 Wes Anderson likes to live his movies before he shoots them. It is a neat way of working, he says; it helps the creative process. So if, for instance, he is making a film about life at a private school, it is only natural to cast his alma mater in the title role. Or if he makes a film about a dysfunctional New York family he’ll have Anjelica Huston wear his mother’s glasses to play the matriarch. His most recent work, The Darjeeling Limited, features a trio of squabbling American brothers on a train ride across India. In preparation, Anderson embarked on the exact same trip alongside his writing partners Roman Coppola and Jason Schwartzman. The three of them, he explains, were acting out the plot as they went along. They were, in effect, being the movie before the movie existed.

When it comes to Wes Anderson, it is sometimes hard to tell where the facts end and the fictions begin. Here he is, a slender white prince in his London hotel suite, with his feet on the table and his nose in the air. At the age of 38, he has conjured up a bunch of wry, literate tragicomedies (Rushmore, The Royal Tenenbaums) that mark him as one of the brightest film-makers of his generation. And yet one can’t shake the sense that in some respects Wes Anderson’s greatest production is Wes Anderson himself, and that his grand body of work might best be read as a kind of romantic reconfiguration of his own life and the people in it. In the case of The Darjeeling Limited, this has rebounded on him in ways he could never have foreseen.

Anderson was born and raised in Houston, though he remains the most unlikely-looking Texan I’ve ever met. “Yeah, I’ve never really seen myself as a Texan,” he says. “I mean, I lived there for the first 20 years of my life and all. But even then I always wanted to live in New York, and probably secretly identified myself as a New Yorker.” As a child he would pretend he was rich, sketching Hampton mansions and European chateaus and then pretending that he lived in them. He is a very Gatsby-esque creature; a callow westerner remade as the classic east-coast sophisticate.

We talk about The Darjeeling Limited, which stars his long-time accomplice Owen Wilson as the older brother who masterminds a “spiritual journey” through the subcontinent. It’s a lush and lovely affair, an oddball picaresque that manages to be at once determinedly inconsequential and weirdly profound. Darjeeling was shot on location, and features a poisonous snake and a man-eating tiger. But the terrain it travels is very much an India of the imagination, and an extension of the man who imagined it. Sometimes that’s part of the problem.

“It’s difficult,” he acknowledges. “I don’t want to repeat myself, but of course I do repeat myself. I have my own personality and some people are going to like that and others are not. I think some people find it very annoying when they feel that a film-maker’s signature is too visible. But without ever quite making that choice, that tends to be the way I make ’em. You can spot ’em a mile off.”

Early word on The Darjeeling Limited has been a lot kinder than it was for his previous effort, 2004’s arch, unsatisfying The Life Aquatic With Steve Zissou. And yet Anderson remains such an acquired taste that the dissenting voices will always have their say. Reviewing the film in the New York Times, AO Scott described it as “precious in both senses of the word”, which sounds about right. Slate critic Jonah Weiner was altogether less impressed. In Weiner’s opinion, “there has always been something obnoxious about Wes Anderson”. For good measure he suggested that the director’s treatment of the peripheral Indian characters in Darjeeling borders on the racist.

“It’s a harsh thing to be accused of, racism,” Anderson says. “It’s hard not to be offended by that. I mean, this is a movie from the point of view of three American tourists, so their window is always going to be pretty narrow. But this notion that we are somehow using India as fodder, that’s just so wrong.” He sighs like an old tragedian. “One does feel misunderstood.”

This leads us, inevitably, to the other area of misunderstanding, the proverbial elephant in the living room. The Darjeeling Limited marks Anderson’s fifth collaboration with Owen Wilson, a man he describes as his best friend. Here Wilson plays a character recovering from a failed suicide attempt. At the end of August, just as the film was about to be unveiled at the Venice film festival, Wilson was admitted to hospital following an apparent attempt to take his own life.

Touring the film on the festival circuit, Anderson has grown used to fending off this subject. Some people, he says, can’t resist the temptation to sift the film for clues to the actor’s mental state, equating the fictional Wilson with the factual one. “You know, I generally just don’t engage in it. The fact is that Owen’s – what do we call it? – experience over the past few months cannot be connected to this film in any way. It’s just bad timing. I mean the whole thing is beyond bad timing. But that character is not based on Owen. Sure, I based him on real-life people, but Owen was never one of them.”

But he is doomed to tackle these questions. It all comes back to that crucial sense of slippage between Anderson’s personality and the personality of his films; the impression that the dramas in one world have echoes in the other. First off, Anderson and Wilson have known each other since they were students. Second, their films invariably feature characters that are much cursed as they are blessed; bright young stars who crash and burn. Small wonder people will add two and two together and come away with five.

Anderson nods. “What you are saying is quite true. And yet no one puts it with that degree of clarity. They just say, ‘Oh, this character tried to kill himself and look, there’s Owen Wilson in real life.'” He shrugs. “Certainly my movies are connected to my real life and the people around me. That’s what confuses people.”

Out of the blue he tells me about his first experience of working with Wilson. This was on Bottle Rocket, a jaunty, freewheeling feature that the pair expanded from a 14-minute short. Bottle Rocket won a powerful champion in Martin Scorsese, established Anderson as an art-house darling and paved Wilson’s ascent to the Hollywood summit. Except it almost didn’t turn out that way. On completion, the film garnered the worst results of any Columbia Pictures test preview, ever, and was widely judged to be a disaster.

“Owen thought we were all washed up,” Anderson recalls. “He thought it was over. I remember him saying that we had to quickly look for work in advertising, which I really did not want to do. He also kept saying that we needed to distance ourselves from the movie.” He chuckles at the memory. “And I’m like, ‘How are we going to do that? We’ve both written it, I’ve directed it and you’re in pretty much every scene. That seems a pretty tall order.’ But no, he was insistent. We had to distance ourselves.”

This question of distance is central to Anderson’s work. Any director worth their salt will inevitably filter their films through their own consciousness, and make the audience see the world as they see it. In the case of Wes Anderson, the fit is snugger than is strictly comfortable. This is what makes the notion that he can somehow disown his own projects so ludicrous (so comical on one occasion; so entangling in another). But it is also what makes him so interesting. Anderson produces movies that are clever and cocksure, fragile and flawed, ephemeral and intense. In person he’s a bit like that himself: a series of successful gestures, at once a self-regarding aesthete and an artist to be cherished. Precious in both senses of the word.