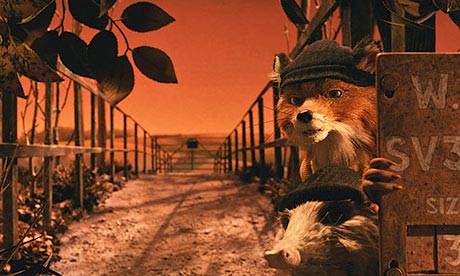 The vision of rural England in the new animated Fantastic Mr Fox may be Buckinghamshire channelling Berkeley, but its sensibility is unmistakably British.

In Wes Anderson‘s reimagining of Roald Dahl‘s Fantastic Mr Fox, Badger – Fox’s closest friend and confidante – is as loyal and steadfast as he was in Dahl’s book. He’s also a fast-talking lawyer who specialises in property sales, able to advise Foxy when not to move den (“not with the rate at 9%”). Fox’s sidekick, Rickity the vole, waves around a titanium card and boasts about his good credit rating, while Fox’s nephew, Kristofferson, uses his downtime to meditate and do yoga.

That Anderson has left his paw print on Dahl’s work is undeniable. Rural England through his eyes is paradoxically urbane – Buckinghamshire channelling Berkeley. His animals check their mobiles for a signal and their wild nature at the door. His Fox is a showboater and fundamentally flawed father figure (just like Royal Tenenbaum or Steve Zissou), whose relationships with his wife and son are marred by incomprehension and frustration. What Dahl hinted at, Anderson has made plain.

Fantastic Mr Fox is one of very few adaptations of classic British children’s literature that moves a story into our era, while remaining faithful to the original author’s vision in both look and feel. Until now this has proved a rarity, with Hollywood movies based on British children’s books falling into two schools – those that sell the stereotype of Britain and those that ignore it.

Robert Stevenson’s Mary Poppins is a good example of the former. Dick van Dyke’s infamous Cockney-Yank accent aside, it peddles a fantasy Britain with a bobby on the beat and a sweep to clear your chimney, with a caricature of the suffragette movement thrown in for the pleasure of an American audience.

Today you can see the same brand of hackneyed images in the Harry Potter movies. Modern Britain is represented by a few token shots of British landmarks (most recently the Millennium bridge in David Yates’s Half-Blood Prince), which seem largely engineered to encourage set-jetting.

On the other hand there are those adaptations of British children’s books that uproot stories planted in rural British tradition and place them in a semi-American no-man’s land. The setting of Chris Noonan’s Babe (based on The Sheep Pig by Dick King-Smith) could just as likely be New Hampshire as old. Ted Hughes’s soulful Iron Man was shifted to pseudo-America during his transition into Brad Bird’s chippy, expendable animation, The Iron Giant. These adaptations earn their “based on” prefix – they fillet anything dark, ingenious and miserable (anything British, essentially) from the source and leave the story bare.

In contrast, Anderson neither ignores the Britishness, nor sells it out. His Fox is ridden with tics derived from a very American angst, but they sit lightly on the back of set and costume design that create an autumnal feel that’s thoroughly British. Dahl’s arch air and Anderson’s occasional petulance sit well together.

Before Fantastic Mr Fox, Anderson was regularly under fire for allowing his quirks to run the roost. Finally, given someone else’s world to play in, the quirk works.

One Reply to “Guardian Film Blog: “Wes Anderson’s urbane Mr Fox is truer to Roald Dahl than most””