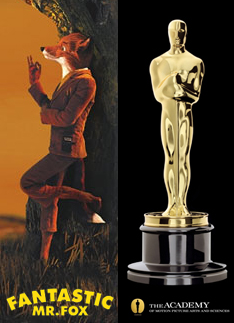 This morning it was announced that Fantastic Mr. Fox received two Academy Award nominations, one for Best Animated Feature and another for Best Original Score. This is the second nomination Wes has received, after receiving a Best Original Screenplay nomination with Owen Wilson in 2002. But what are Fantastic Mr. Fox‘s chances come Oscar time? We’ll take a look at that and get Wes’ reaction to the nominations after the break.

Finally, AwardsDaily has a round-up of a lot of nominee reactions given to the media, and here’s Wes’.

I am very honored to have received an Oscar nomination for Fantastic Mr. Fox.  Roald Dahl’s classic story has been one of my favorite books since I first learned to read, and it was an amazing experience to work with my many, many very skilled collaborators and bring it to life as a stop-motion film! I would like to congratulate Alexandre Desplat, who wrote our wonderful score, for his nomination as well. – Wes Anderson, The Fantastic Mr. Fox, Animated Feature