Details after the break…

END_OF_DOCUMENT_TOKEN_TO_BE_REPLACED

This is a short film that I made with a few friends that Edward Appleby has been kind enough to let me share with you here. Any comments or questions can be fielded at the Yankee Racers forum. Thanks. – Loraxaeon

Darjeeling was a lot lower budget, and I feel like Fox didn’t expect huge numbers from it.

It appears with Mr Fox, that they’re going to carefully place the release date. I think this bodes well, and I think Wes’s meticulous attention to detail will translate well to clay (or whatever they use — models). I really hope Mr Fox can be upper echelon stop motion — approaching Nightmare Before Christmas status.

Certainly, Wes has accumulated more fans with each film, so all those people will be interested. What do you think Mr Fox needs to be? Light? Detailed? Epic? Rated G?

Because of a recent onslaught of spamming, automatic activation of new accounts on the Yankee Racers forum has been temporarily suspended. In order to activate your account, send an e-mail to edwardappleby @ yankeeracers.org (no spaces).  We encourage you to drop by the forum.

If you are in the Dayton (Ohio) area, be sure to stop by the Dayton Dirt Collective for a screening of Rushmore on Sunday at 6:00 p.m. (details). 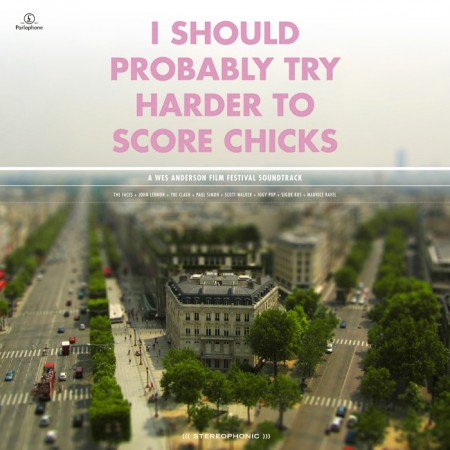 Please e-mail edwardappleby @ yankeeracers.org from the registered e-mail address to expedite this process.

Jessica over at the Yankee Racers forum posted this tidbit a while ago, but I never shared it on the site. On her very cool site GOOP, Gwyneth Paltrow (The Royal Tenenbaums) recently asked “five brilliant directors (four of whom I have worked with and one who I worship) to share their top five DVD rental picks.”

Wes’ Picks:
(Wes Anderson directed Bottle Rocket, Rushmore, The Royal Tenenbaums, etc. He is one of the most specific directors I have ever worked with. When I played Margot in The Royal Tenenbaums, he knew exactly how he wanted my hair, clothes and eye makeup. He is so inspiring to work with because you feel like you are the one crazy, important color he needs to create the whole picture. Also, he is a great dresser.)

Neon Genesis Evangelion
This is a Japanese cartoon that is very difficult to describe and might not sound that great if I tried anyway. It is 24 episodes, and we watched them all in less than a week because you start to want to believe it’s real. This could spawn something like Scientology.

From the Life of Marionettes
I’d never heard of this until last month. It’s an Ingmar Bergman movie he made in Germany where I think he was a tax exile.

More or less anything that says The Criterion Collection across the top it. The most recent one I had never seen before and loved was Costa-Gavras’ Missing.

The folks over at the Upright Citizen’s Brigade have made a parody of Wes’ filmmaking (The Royal Tenenbaums, specifically). I can’t decide if I think it is funny or not.

We are organizing a Wes Anderson Film Festival. A few years back, a group of Yankee Racers met online and watched the films of Wes Anderson together. We are doing it again and need your feedback!

And, don’t forget that the Wes Webicon contest is still on!  I will post some new entries later today.

A few years back, some of the Yankee Racers organized a Wes Anderson Film Festival.

We want to try it again. We would put up a chat room, meet at a designated time, and press play simultaneously. What do you think? What film should we watch together first?