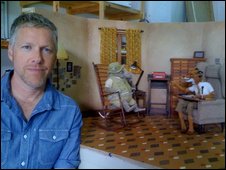 Great story from the Beeb. (By the way, Gap on Regent Street in London apparently has the a Mr. Fox set on display.)

In a cavernous warehouse studio in east London, a selection of sets and puppets from Anderson’s stop-motion movie sit dwarfed by their surroundings.

Most are no wider than a couple of real foxes – nose-to-tail.

Among the most impressive sets are Mr Fox’s cosy study (pictured above), the Nag’s Head pub, and an underground hideaway overflowing with stolen bottles of cider and joints of ham.

“This is a great set because it shows the level of detail to the props that the team created,” says the film’s producer Allison Abate. “Every prosciutto looks delicious!”

Wes Anderson, director of The Royal Tenenbaums and The Darjeeling Limited, stayed at Roald Dahl’s house in Great Missenden, in Buckinghamshire, while writing the screenplay.

The film tells the story of the charismatic Mr Fox who returns to his old ways as a chicken thief, pitting him against the farmers Boggis, Bunce and Bean.