Skip to content
The importance of the books, of the narrators, of the narrative, in the movies made by Wes Anderson are exploded in this beautiful video made by the people from The A to Z Review. Enjoy!

END_OF_DOCUMENT_TOKEN_TO_BE_REPLACED

The Life Aquatic With Steve Zissou

With the first movies, we thought he would be like Woody Allen, whose credits always look like the same, but then he changed. First he added an image, then changed the color and then he changed the font! If you ask me, I think he has become more elegant over the years, and you can also see that in the credits.

And by the way, tell me you can see these images and not mentally listen to the songs that play at the end of his movies.

The 49th Annual New York Film Festival will be taking place next month, and they’ve announced a ten-year anniversary screening of Wes’ masterpiece The Royal Tenenbaums. The screening will take place October 13th, and will be followed by a Q&A with Wes and cast members from the film. The film of course had its world premiere at the festival in 2001. More info about the festival and the screening can be found at their website.

The first wave of these redesigns has earned a lot of attention around the internet. We here at Rushmore Academy have also taken note, and an exclusive Rushmore//Youssef surprise is in the works. It’s a cliffhanger, so keep checking back for more details.

In the meantime, you can purchase the released-as-yet posters in 2 sizes at Ibraheem Youssef’s shop.

Over at Salon, Matt Zoller Seitz (freelance critic, and author of one the earliest and best profiles of Wes, and this incredible series of video essays from earlier this year) has been taking a look at some of the most influential directors of the decade in an on-going series of essays. Seitz’s latest examines the work of Robert Zemeckis and Wes Anderson.

That’s where Wes Anderson comes in. The director of “The Royal Tenenbaums” (2001), “The Life Aquatic With Steve Zissou” (2004), “The Darjeeling Limited” (2007) and this year’s Roald Dahl adaptation “Fantastic Mr. Fox” is as much a train-set filmmaker as Zemeckis, Jackson and Lucas, and like Fincher, Paul Thomas Anderson (“Punch-Drunk Love,” “There Will Be Blood”), Zemeckis and Spielberg, he’s one of the few prominent Hollywood filmmakers working in the ’70s auteur tradition — and doing it with a style so distinct that it can never be stolen, only imitated. He’s notorious for fretting over every aspect of his movies, from the texture of the clothes to the precise geometric motion of each shot and camera movement to the choice of on-screen font (he prefers variations of Futura). Detractors describe his style as fussy, overcomplicated, even airless — and if one prefers a messier, more spontaneous kind of filmmaking, or a more “invisible” style of direction, Anderson is almost certainly the opposite of fun.

I won’t mount a defense of Anderson as an exciting, imaginative and important filmmaker in this article, because I’ve already done it in a series of video essays.I mention him in this piece because of two particular aspects of his art. One is his commitment to analog moviemaking. He shoots on film and prefers to do everything, special effects included, on the set rather than create them after the fact. Even when he employs digital effects or processes, he calls attention to their artificiality; think of the obviously stop-motion sea creatures in “Aquatic” — or, for that matter, the unruly, roiling fur on the creatures in “Fantastic Mr. Fox” — which the director insisted be fabricated with hard-to-manage animal hair rather than more controllable synthetic hair, because he just liked how it looked.

Be sure to read the full piece at Salon, and leave your comments below. It’s a great essay, and well worth the read.

In addition to the great Season’s Greetings video we posted yesterday, we have a video card similar to the Thanksgiving one we shared last month. After the break are shortened links to both videos to send to friends and family for holidays.

END_OF_DOCUMENT_TOKEN_TO_BE_REPLACED

”WHY did I pick this movie?” Wes Anderson asked himself, slouching against the wall in the glass-lined lobby of an office building on the Paramount Pictures lot, a sultry black-and-white portrait of Dorothy Lamour peering over his shoulder. ”I don’t actually have an answer for that.”

Mr. Anderson, it turns out, is the sort of person who tells you — a little sheepishly — that he has no answer to something, and then spends the next two and a half hours giving you one.

A slanted, self-deprecating smile spread across his face. Tall, bony and professorial, he leaned his forehead down so that he had to tilt his eyes up a bit to look straight ahead. ”One thing is, I’m a big François Truffaut fan and this is the most unpretentious movie that I can possibly imagine,” said Mr. Anderson, 32.

END_OF_DOCUMENT_TOKEN_TO_BE_REPLACED 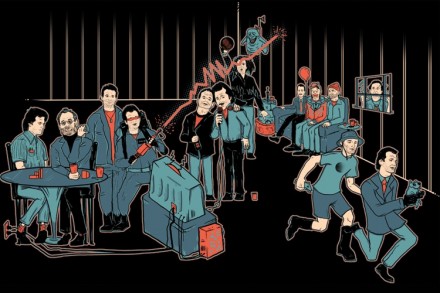