“On the Street… Wes Anderson, Paris” 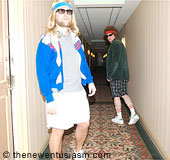 It looks like advertising agency Hart+Larsson pulled a fast one on the fashion industry.

For the last two days, legions of Internet fashionistas have been abuzz with reports of an online spoof of Marc Jacobs’ Jurgen Teller-shot print advertisements. The Jurgen/Jacobs collaboration recently made news with shots of Victoria Beckham, also known as Posh Spice, in compromising positions.

The Flash images at Thenewenthusiasm.com feature two wigged men dressed in late-1970s-style tennis gear reminiscent of the Richie Tenenbaum character in Wes Anderson’s 2001 film The Royal Tenenbaums. One shot features a man in a floral dress that looks as though it belong in a past Jacobs’ collection.

Yesterday, fashion news blog Fashionista.com wrote a post about the Web site, asking readers for any leads on where it might be coming from. They speculated it may have been a fashion student or Jacobs himself. This morning, fashion trade magazine Women’s Wear Daily said it called Jacobs’ corporate offices and was told the company, owned by French conglomerate LVMH, had nothing to do with the ads.

The domain thenewenthusiasm.com is registered under Thomas Larsson and Greg Hart, a duo of creatives who name MTV, AOL and Olympus (other-otc: OCPNF.PK – news – people ) as clients. Greg Hart told Forbes.com the Web site was simply an experiment. “We’re huge Marc Jacobs fans. And Juergen Teller, too. We aim to flatter.”

Larsson also said that the domain–The New Enthusiasm–is the company’s “platform to challenge tired notions of what is and what is not.”

One Reply to “Wes on fashion blog Sartorialist; “Joke’s on Jacobs””