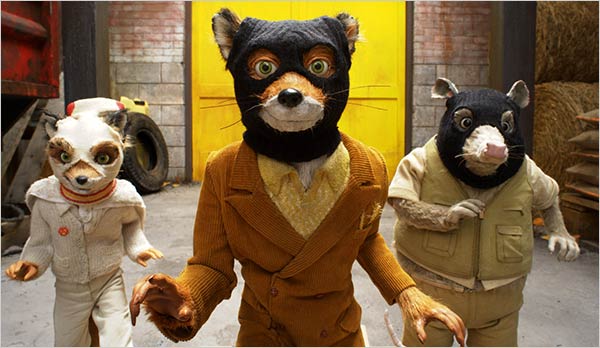 FROM a young age Wes Anderson has felt proprietary about Roald Dahl’s classic children’s novel “Fantastic Mr. Fox.” “It was the first book at our household that was considered to be mine,” he said. “I was obsessed with anything involving hidden passageways or underground tunnels.”

Mr. Anderson’s live-action films have always existed in parallel realities — elaborately storyboarded, art-directed parallel realities, no less — and so it is not too great a leap for him to be conjuring a world from scratch for his stop-motion animated version of “Fantastic Mr. Fox” (opening Nov. 13).

Controversy flared recently when some crew members grumbled to The Los Angeles Times about Mr. Anderson’s absence from the film’s London set during the shoot. He has acknowledged that he did much of his work from Paris, where he has an apartment, sending detailed instructions, photos and videos to the animators. In any case, the finished film, which he wrote with the filmmaker Noah Baumbach, suggests that Mr. Anderson was anything but hands-off. This may be his first animated film, but his fingerprints are everywhere, from the dollhouse cross sections to the funny-sad family dynamics to the belief that production design is intimately linked with character.

Like this season’s other adaptation of a kid-lit favorite, Spike Jonze’s “Where the Wild Things Are,” “Fantastic Mr. Fox” is more concerned with naturalism than most movies with talking creatures. The anthropomorphic foxes (George Clooney and Meryl Streep provide the lead voices) have real fur. The look of the film — more redolent of the warm, homey Donald Chaffin illustrations that accompanied the first edition of Dahl’s 1970 book than the spiky Quentin Blake drawings in the more familiar paperbacks — is rooted in concrete details (Mr. Fox’s dapper corduroy jacket, for instance, is a miniature of one of Mr. Anderson’s). “Wes wanted everything to come from something in life,” said the film’s production designer, Nelson Lowry. “Even the simple things were researched and referenced.”

At the same time, Mr. Anderson said, he knew that the movie had to exist in “a zone of artifice.” For one thing, he kept to a strict autumnal palette of ochers, siennas and umbers. “I didn’t want any blue skies and I didn’t want any green grass,” he said. “And since the whole movie is in fields, having no blue and no green radically transforms your sense of what is natural.” Images from the set of the film can be seen here.

While it is common for cast members on an animated film never to meet — parts are often recorded individually — Mr. Anderson wanted his actors not only to interact but also to do so in an environment that suited their semi-feral characters. Much of the film was recorded outdoors, at a friend’s farm in Connecticut, far from the sterility of a studio.

“Wes didn’t mind overlapping or mistakes or any type of respiratory issues,” said Jason Schwartzman, a longtime collaborator of Mr. Anderson’s who does the voice of the junior fox, Ash. In fact, Mr. Anderson said, he wanted natural sounds in the mix — the wind, a burbling stream — and he hoped the radio-play atmosphere would compel the actors to really dive into their scenes. It worked, according to Mr. Schwartzman. “We were all digging in the dirt,” he said, “rolling around in the bushes and acting like animals.”

For Mr. Anderson, the idea of a “Fantastic Mr. Fox” movie has always been inseparable from stop motion, the painstaking method that requires miniature figures to be moved in increments and photographed one frame at a time.

“I like the way fur looks and moves in stop motion,” he said. One of his influences was “Le Roman de Renard” (“The Story of the Fox”), a 1930s stop-motion film by the pioneering Russian animator Ladislaw Starewicz based on the trickster fox of medieval European folklore. Besides showcasing the bristling textures of real animal hair, that movie also suggested to Mr. Anderson the potential for playing with scale in the stop-motion process, using sets and puppets of varying sizes. The main characters on “Mr. Fox” were produced in at least three sizes, ranging from about an inch (for wide shots, usually in the more involved action sequences) to more than a foot tall (for closeups). The puppets of the human characters are half-scale (about five inches tall) and were used in the film’s farmers-versus-animals showdown.

While writing the screenplay, Mr. Anderson and Mr. Baumbach stayed at Gipsy House, the Dahl estate near Oxford, an act of homage that was also a fruitful research expedition. Dahl’s writing shed became the model for Mr. Fox’s study. The surrounding countryside inspired the film’s lay of the land. They also discovered, in the author’s original manuscript, an ending, complete with sketches, that takes place at a supermarket. Dahl discarded it, but it worked well for the movie.

“That was awfully lucky, because we needed a new ending,” Mr. Anderson said. (He and Mr. Baumbach had moved up the book’s conclusion to the middle of the film.) To create the aisles of produce, Mr. Lowry used real fruits and vegetables, augmented with clay, to make molds, and unconventional materials — like clay, paper, and fabrics, dipped into a glue solution — to give the foodstuff “a unique textural feel against all that antiseptic white of the supermarket world.”

Ash’s bedroom is filled with personalizing touches: the shape and patterns of the bunk bed are taken from a Gypsy caravan parked in the garden of the Dahl estate. But there may be no aspect of the film more personal than the subplot involving the alienated teenager Ash and his visiting cousin, the faultless, athletic Kristofferson (voiced by Mr. Anderson’s younger brother, Eric) — a story line that Mr. Anderson expanded as the shoot progressed. Eric Anderson, an illustrator and children’s book author who has worked on the designs of his brother’s movies, said: “It’s a small, gentle kid relationship, and that seems out of the ordinary these days. It was very moving to sense how Ash and Kristofferson were dramatizing archetypal boy-brother-type relationships.”

Is he by any chance thinking of the relationships among the Anderson brothers? “It might have a bit more Mel and Wes,” he said, referring to their older brother, “than Wes and Eric.” Told of his younger brother’s theory, Wes Anderson laughed. “I think he’s right,” he said. “It never occurred to me, and he’s never said that to me, but of course, that’s exactly what it is.”

More than 30 sets were built, ranging from a chicken coop to foxhole interiors to an office belonging to the lawyer Badger (voiced by Bill Murray). “It’s a law office,” Mr. Anderson said, “but Badger’s law partner is a beaver, so it’s in a beaver dam.” The surfaces were inspired by walls made of woven twigs that Mr. Anderson came across at an art gallery in Paris (he and Mr. Lowry, the production designer, were constantly comparing visual references by e-mail). This being an Anderson film, the sets are filled to overflowing with telltale props, each handmade to his exact specifications.

“Anything we want to put in the shot, somebody’s got to make it,” he said. Mr. Lowry noted, “You could go to a dollhouse place and buy a prop, but obviously it wouldn’t have quite the flair or the style.” In the old-school spirit of predigital animation, many of the sets use inventively repurposed household materials: terry cloth for grass, cotton balls for smoke, Saran wrap for a waterfall, the contents of tea bags for tree leaves.