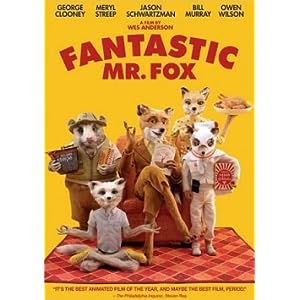 A review of Fantastic Mr. Fox on DVD and Blu-Ray, you say? But, they came out over a month ago!

Well played, reader. But, we need to do a review. We promised.

We, of course, love the film. Owning it, being able to watch it over and over offers obvious benefits. The careful details of a Wes Anderson film, of the world inspired by Roald Dahl’s fantasy universe and his real world in Great Missenden in the UK, can be observed, noted, taken in… and the colors are utterly mesmorizing…

1) Buy the Blu-ray. It comes with the high-definition and regular ol’ DVD versions, so you can watch even if you don’t have a fancy Blu-ray player and keep the other disc for later. We don’t have the Blu-ray version (d’oh!), but it also features a digital copy and special features, which brings us to point deux…

2) The regular DVD version is comparatively bare-bones. It includes “From Script to Screen,” “Still Life (Puppet Animation),” and “A Beginner’s Guide to Whack-Bat.” The Blu-Ray set also includes “Making Mr. Fox Fantastic,”  “The Look of Fantastic Mr Fox,” “The Cast,” “Bill and His Badger,” and “Fantastic Mr. Fox: The World of Roald Dahl.” These bonus features are similar to, but more extensive than (please share your thoughts), the well-done online documentaries. But, they are absolutely worth having, and it is too bad that the regular DVD disc only includes a few of them.

3) The transfer is absolutely stunning.

4) Minor complaints: the menus are a bore; the layer change comes at an awkward point; and, the “Guide to Whack-bat” is rather useless.

Once we have The Darjeeling Limited Criterion-ized, we will start our Fantastic Mr. Fox campaign.