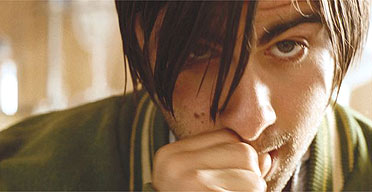 The Darjeeling Limited’s Jason Schwartzman has carved out a career playing freaks and geeks. Andrea Hubert meets the actor recently named ‘the coolest man in Hollywood’

Looking like a stylish, impeccably polite hybrid love child of Cher, Anthony Kiedis and Steve Carell, Jason Schwartzman sits back, one leg casually slung over the table, waiting for the interview to begin. I’ve seen this laid back stance before – on that infamous YouTube clip, where an equally unperturbed Schwartzman sits quietly, one leg on the desk, observing without drama on the set of I Heart Huckabees as director David O Russell goes apeshit on co-star Lily Tomlin. In the “comments” section below, someone remarks “I love the way Jason Schwartzman is just sitting back, chilling”. I kinda like that too.

Schwartzman, (whose only response is “I’d work with him again in a second, he’s brilliant”), is, like cousin Sofia, characteristically low key for a Coppola. Springing as he does from a family chock full of Oscar winning actors, writers and directors, perhaps it’s in his nature to deny any hint of the stereotype that he may have been born with a silver spoon in his mouth just because mom Talia Shire was getting sweaty with Sylvester Stallone (she played Rocky’s girlfriend) and uncle Francis was winning Oscars throughout his childhood. Which, according to Schwartzman, was far away from film sets and pretty much nothing whatsoever to do with acting.

But acting found him. It was as eccentric outsider Max Fischer in 1999’s Rushmore that Schwartzman and best friend Anderson both gained a cult following. Eight years later they are reunited, writing The Darjeeling Ltd together with cousin Roman Coppola, and preparing through what he calls “personal improv”. What is that exactly? He smiles at the memory. “It’s like there seems to be this comic thread of advice between us. I’ll go to Wes and say ‘I said this to her and she said this back, and what I wish I said was this, and what do you think I should have said’ and it’s sort of like a role play, so we kind of rewrote stuff that happened to work out.” It’s an endearing tableau, and one he earns cool geek points for being thoroughly unsheepish over.

Post Rushmore, his CV provides a cornucopia of quirkiness that could make even eternal oddball Steve Buscemi envious. Schwartzman fans will sing his praises in the otherwise unremarkable Slackers as Ethan, the creepy stalker, speed freak Ross in Spun, or Jeremy in Shopgirl, the plain speaking social retard who makes Claire Danes buy her own movie ticket on their first date. The dysfunctional milieu is one Schwartzman is very comfortable with.

The Darjeeling Limited continues the theme with Schwartzman, Owen Wilson and Adrien Brody as estranged brothers in India on a spiritual quest, complete with Wilson’s regimented laminated itinerary and determination to “find himself”. It’s distinctly lighter than Anderson’s other famously dysfunctional family the Royal Tenenbaums. Schwartzman’s character Jack, a barefoot lovelorn writer, is perhaps the most restrained of all the crazies he’s played, though he does a nice line in pharmaceutical drug abuse.

Do you consciously choose weird characters?

“Well, I guess it depends on your definition on what’s weird and what’s normal. What is normal? You tell me. You’re the one who thinks they’re weird.” Well, here’s a list for you. Stalker, speed freak, impotent king of France…

“I wanted to play a stalker because I thought it’d be cool to play a villain. Someone unrestrained, with real problems. Someone really messed up. But I liked him anyway, I like them all. I don’t think they’re weird, I think they’re great. And the people around them think their life is funny, like it’s a big joke, but they don’t think it’s funny. I’m attracted to characters who don’t mean to be funny, but sort of are anyway. They all seem to want something really badly, something they may never get.”

“Well I was never one of those crazily ambitious kids. You know the ones that dress up like little cowboys and have their headshots up in the barber’s shops. I had no idea that acting was something I wanted to do till I was 16, and I saw Harold And Maude and Dog Day Afternoon and I got the same feeling that I got through music.”

And how did that feel?

What about the fact that you come from a crazily successful family? Your uncle and two of your cousins, Sofia Coppola and Nicolas Cage, have Oscars. Do you feel under pressure to get one too?

“I never thought about it until you just said it. Now it does seem kind of funky. Thanks for that. But no, it’s not like that at all. The only pressure I ever feel is from my mom to not be a dick.”

Is that because you can be?

“I don’t think I’m a dick. Am I? But everyone can be one at some point. Hollywood wants you to be a dick, the system is set up that way, so you end up feeling disconnected from reality, and that’s when you become a dick. The rules bend. But as far as I’m concerned, the rules don’t bend. You always have to be nice to people, and respectful. And not be a dick.”

So you aren’t a celebrity queue jumper?

“I’d love to say no, but actually I am. Not because I want to be, but just if I’m late to catch a plane or something. This happened very recently. It was so embarrassing, the entire line was going ‘What the fuck?’ and I was kind of mouthing ‘I’m really sorry!’ I wouldn’t do it at the movies though. Or in the supermarket. No way.”

Fame has its perks then?

“Actually, nobody ever recognises me. I certainly never get approached by women. The only people who would ever recognise me would probably be the types of people who’d be in a movie theatre at the exact same moment I was walking around.”

“Obviously I’m not. That’s probably Johnny Depp. I also like Michael Cera, from Superbad. I actually have one scene in the new Judd Apatow film. People keep asking me what I did to prepare for my role as Ringo Starr and I’m like, ‘I said yes to the part and was on set the next day’. What is cool, anyway? I think this interview is cool, I’m enjoying it. Is my career so far cool? If you were me, would you be bummed out by my career? Because I’ve played so many weird characters?”

Weird is the new cool. Your career’s doing fine.

If you change direction any more often, you’ll be interviewing me…

“Now that would be cool. How about I write my version of this article, and you write your version, and we print the two versions side by side? I wish I had the time. I really would like to. Do you want cookies? I’ll get you cookies. We can write and eat cookies. I like interviews. I’m really into these Dick Cavett DVDs at the moment, he’s a talkshow host and he’s interviewed some of the greats.”

“It’s easier said than done to go to India and find yourself or whatever, and I’d much rather someone said that than didn’t say it, no matter how cheesy you might think it is. I like the positive intention implied, even if it might seem bogus, like Spirituality For Dummies, or India 101. It’s probably not how I would approach a spiritual journey. But it’s cool.”

As we wind it up, I’m waiting for the obligatory plug towards his music career, but it doesn’t happen (Schwartzman was formerly in the band Phantom Planet, who provided the theme tune for The OC, and currently makes music as Coconut Records). I start to wonder if I’m the only cynic in the room. When our time runs out, he turns to me and asks, with a grin, “So which Hollywood actor do you like?” I tell him Ray Winstone is my dream man. “Oh you like a big guy? Yeah, I can just imagine you climbing onto that!” he laughs dirtily. “Hey, do you think I look good on the dance floor?” And he whirls off into the corridor, humming the Arctic Monkeys, almost certainly not trying to find himself.

· The Darjeeling Ltd is out on Friday

Coppoloada this – meet the family

Won a Best Score Oscar for the Godfather I and II and a Golden Globe for his Apocalypse Now score.

Played long suffering Adrian Balboa in the Rocky films, and Connie Corleone in The Godfather trilogy.

Sometime actor and currently the lead singer in Rooney.

Son of Francis and co-writer on The Darjeeling Ltd, Roman is a music video director for the Strokes, Green Day and others.