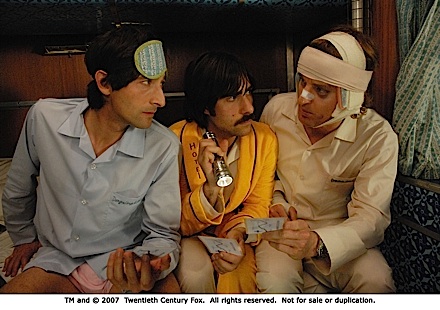 “Wes Anderson doesn’t stray too far afield with “The Darjeeling Limited,” but judging by his latest film’s considerable merits, do we really want him to? . . . Asking Anderson to change (or “grow,” as some critics would call it) ignores everything that’s right with the artistic fluidity from “Bottle Rocket” to here. If “The Life Aquatic with Steve Zissou” seemed too mechanical, too locked-in to its director’s gambits, then with “Darjeeling” Anderson has found a way to overcome his own limitations without forgoing his expected style.

Some of the most wistful, even transcendent passages of the director’s career.” – Michael Koresky IndieWIRE

“THE DARJEELING LIMITED, the latest film by Wes Anderson, is pretty much awesome. . . Anderson has absolutely perfected his style. It is easily his crowning achievement so far . . . perhaps the best work Wes Anderson has yet completed.” – AIN’T IT COOL NEWS

“Happily, The Darjeeling Limited redeems that early promise and then some . . . Though these boys don’t remotely resemble each other, they achieve a fraternal chemistry — all deadpan humor and hangdog glamour — that hurdles them, in a turquoise-and-pink train, toward their (and Anderson’s) true adulthood.” – Flavorpill